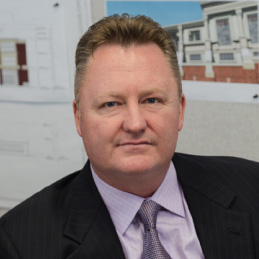 Sean Porter is the owner of Loveless Porter, LLC, a full-service architecture and engineering firm in Manassas, Virginia. A graduate of Catholic University of America in 1993 and 1995, Sean worked at INTEC Group and J3 Design Collective prior to his time at Loveless Porter.
In 2007, after Sean joined Robert Loveless Architects in 2005, became a partner creating Loveless Porter Architects or LPA. He had always wanted to grow within a firm, becoming a bigger part of that firm rather than starting a new firm from the ground up. In 2014, Sean became the sole owner of the firm with Robert’s retirement.
Loveless Porter’s work can be seen throughout Northern Virginia, including the iconic designs of the Loy E. Harris Pavilion in Manassas and the Sweeney Barn in Prince William County.
Sean gives to his community through his philanthropic work. He has worked with Boys and Girls Club, ACTS, Serve, Semper K9, Habitat for Humanity, Fraternal Order of Police, Northern Virginia Family Service, Seton School and All Saints Catholic Church. He has served as a board member for Court Appointed Special Advocate Children’s Intervention Services, or CASA-CIS since 2017. This non-profit organization helps abused and neglected children in the community by providing court appointed special advocates to represent the children’s best interests in court cases.
He has been involved with professional organizations like Prince William Chamber of Commerce, Leadership Prince William, National Council of Architectural Registration Boards and Leadership in Energy and Environmental Design.
He continues to grow professionally and personally as he navigates the world of being a business owner, entrepreneur and philanthropist. He feels he is blessed to have much to give to those who have less.